skip to main | skip to sidebar

Last week I saw a recipe for Mongolian Beef on the blog Love & Olive Oil. I was immediately taken with the simplicity of the recipe and wanted to try it as soon as possible. So let's get started and I'll share more at the end. 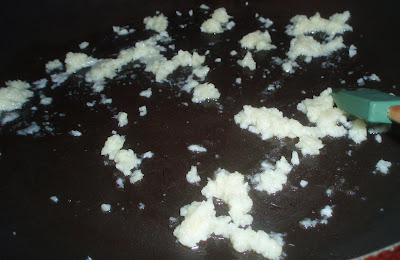 Start with garlic and ginger in a little oil. Get that shimmering and fragrant. 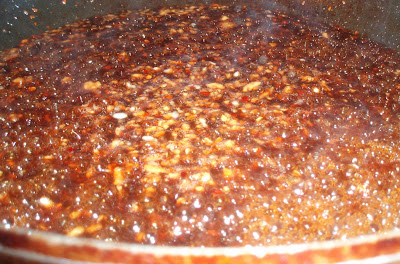 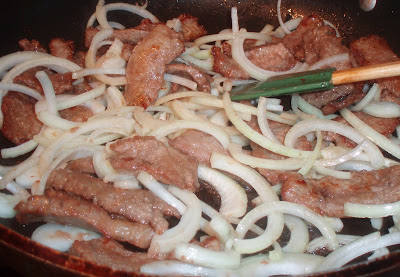 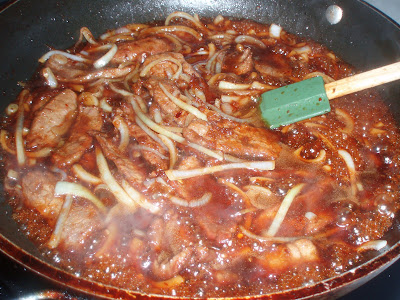 Return the sauce to the pan, simmer. 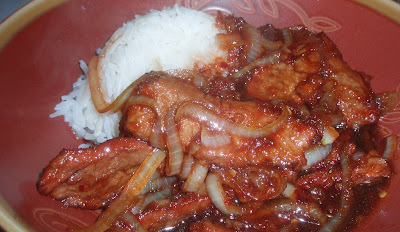 Serve with rice. Not a great photo, but it was tasty!

I really liked this and will make it again, but there will be some changes...

1) Oil. There is a lot of oil. The original recipe called for one cup, which the blog hosts recognized as too much and suggested less. I used 1/4 cup and next time I might go to just a tsp or so. There's something about vegetable oil and beef that I'm not fond of, I can't quite place it, but I can tell when beef is cooked in oil. Can't describe what I'm tasting, but I don't enjoy it. So less oil will be better.

2) Heat. I added the red pepper flakes last night. They were listed in the recipe, but I wanted a counter point to the extra sweet sauce. I didn't use enough, I couldn't taste it. I will probably go to 1 tsp next time, instead of 1/2 a tsp.

3) Protein. Yes, the recipe is called Mongolian Beef. I think it would be really tasty with chicken as well. So I might try that too.

4) Veggies. I skipped the green onions, because I didn't have any. Next time I'll try to have some. I also want to add carrots and maybe some strips of bell pepper. I used to work in a Chinese restaurant many years ago, as a waiter. HA! Well, they served a Mongolian Beef and it was my favorite dish to order. There were carrots and peppers. It was served on crispy rice noodles. I can do without the rice noodles now, but I think the extra veg would be nice.

5) Sauce. There was a lot of extra sauce. Next time I will try changing the quantities of the ingredients for the sauce. I will keep the 1/2 cup of soy sauce. I will cut the water to 1/4 cup and only 1/2 cup of brown sugar, instead of 3/4 cup.

That said, I look forward to round two of the Mongolian Beef experience.

Make the sauce by heating 2 teaspoons of vegetable oil in a medium saucepan over med/low heat. Add ginger and garlic to the pan and quickly add the soy sauce and water before the garlic scorches. Dissolve the brown sugar in the sauce, then raise the heat to about medium and boil the sauce for 2-3 minutes or until the sauce thickens. Remove it from the heat.

Slice the flank steak against the grain into 1/4″ thick bite-size slices. Tilt the blade of your knife at about a forty five degree angle to the top of the steak so that you get wider cuts. Dip the steak pieces into the cornstarch to apply a very thin dusting to both sides of each piece of beef. Let the beef sit for about 10 minutes so that the cornstarch sticks.

Heat up one cup of oil in a wok or large skillet until it’s nice and hot, but not smoking. Add the beef to the oil and saute for two minutes, or until the beef just begins to darken on the edges. You don’t need a thorough cooking here since the beef is going to go back on the heat later. Stir the meat around a little so that it cooks evenly. After a couple minutes, use a large slotted spoon to take the meat out and onto paper towels, then pour the oil out of the wok or skillet.

Put the pan back over the heat, dump the meat back into it. Add the onion and saute for one minute. Add the sauce, cook for one minute while stirring, then add all the green onions. Cook for one more minute, then remove the beef and onions with tongs or a slotted spoon to a serving plate, leaving the excess sauce behind in the pan.
Posted by ScottE. at 4/17/2009 07:17:00 AM
Email ThisBlogThis!Share to TwitterShare to FacebookShare to Pinterest
Labels: Beef, Chinese

I agree on all the suggestions for improvement. But for a first go at it, I found the dish tasty and ate every bite.

And I wasn't hungry half an hour later.

This does look very easy. My dad has a similar recipe, though he adds snow peas and does a cornstarch slurry to thicken the sauce. I'm planning to try it soon, and I'll probably do a combo of your two recipes. I like that you use the red pepper flakes, which I've just recently fallen in love with.

Who Are You Eating With?

ScottE.
I can be reached at scotteichinger AT msn DOT com.

Eat With Me Links: